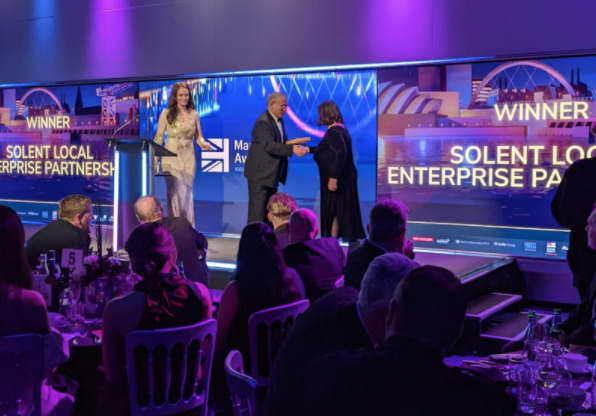 VFS partner, The Solent Local Enterprise Partnership (LEP) is celebrating after its triumph at this year’s Maritime UK Awards, having scooped a national award for its work to secure a more prosperous and sustainable future for the Solent region.

At the awards ceremony, which took place on 10 March 2022 at the Glasgow Science Centre, the LEP was awarded Clean Maritime Enabler – recognising the investments the Solent LEP has made to support the green innovation in the region’s maritime sector, including a cruise terminal, complete with solar generation and ‘shore power’ facilities, and an Enzyme Innovation Centre for the breakdown of plastics.

“We’re delighted to have won this award. The Solent is a hugely important coastal community and as a result we have invested £15.4 million in a green innovation programme that has unlocked a further £50.3 million of private sector investment to deliver several key projects.

These include: A shore power facility at the Port of Southampton, making it the first major commercial berth and cruise terminal fitted with this technology in the UK; the Horizon Cruise Terminal at the Port of Southampton which has solar generation and shore power, providing a world leading zero emissions facility for cruise vessels in port; the Centre for Enzyme Innovation which is developing green recovery solutions for the breakdown of plastics, enabling their re-use, tackling one of the world’s greatest pollution challenges; and a project focusing on removing 3,431kg of nitrate pollution p.a. from the Solent marine ecosystem.

We are thrilled that our work in supporting greater sustainability in the Solent’s maritime sector has been recognised on this important national stage.”

The Solent LEP were not the only organisation based in the Solent region to be named winners at last night’s glittering Awards evening: Cowes Enterprise College was named winners of the Future Skills Award; and Serco was named Diversity Champion of the year.

Recognising the very best of the UK’s maritime sector, the Maritime UK Awards focus on celebrating excellence in the sector, including business growth, innovation, sustainability and diversity.